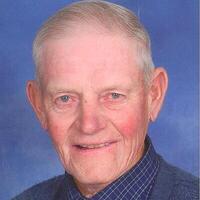 James Merlyn Steever was born on December 20, 1932, on the family farm east of Lennox, SD, the son of Henry and Minnie (Naatjes) Steever. He attended Sherman District #51 Rural School and then graduated from Lennox High School in 1950. Jim entered the U.S. Army in 1953, stationed in Germany during the Korean War, until his honorable discharge in 1955.

On August 22, 1953 he was united in marriage to Carol Cleveland at Lands Lutheran Church, rural Canton, SD. The couple made their home on the Steever family farm east of Lennox. Carol died on February 5, 2005, ending a marriage union of over 51 years.

Jim was a member of the First English Lutheran Church, Lennox. He enjoyed woodworking, hunting and fishing. He was an accomplished fast pitch softball pitcher, whose efforts got him inducted into the South Dakota Softball Hall of Fame. Jim enjoyed his tractors and his loyal and devoted dog, Banjo. Most of all Jim loved his family.

Besides his parents and wife Carol, Jim was preceded in death by two brothers: Verlyn and Donald.

Public funeral services will begin at 2:00 p.m. Saturday, July 18 at First English Lutheran Church, Lennox. Visitation with the family present, also at the church, will be from noon to 2 p.m.