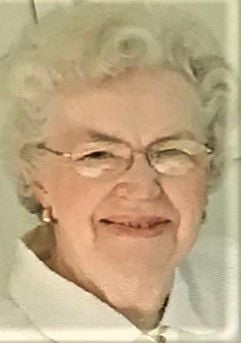 Frances Colleen Burchill died peacefully on June 6, 2020, at Prince of Peace in Sioux Falls, SD. She will be remembered always as a loving wife, a devoted mother, a supportive grandmother, and a woman of great Catholic Faith.

There will be a visitation, without family present and with social distancing practices in place on Thursday, June 11, 2020, from 2:00pm until 5:00pm at Isburg Funeral Chapel in Pierre. Funeral services will be at 10:00am on Friday, June 12, 2020, at Saints Peter & Paul Catholic Church in Pierre, with burial to follow at Black Hills National Cemetery near Sturgis. You can join the family via live stream starting at 10:00 am, by clicking on the video box at the top of Colleen’s obituary page at www.isburgfuneralchapels.com.

You can also show support by taking part in our “Together In Spirit” option. Please email your name, a message of support to This email address is being protected from spambots. You need JavaScript enabled to view it., and we will place it on a heart that will be attached to a chair at the service. The family will be able to read your heartfelt message and know that you are together with them in spirit.

She graduated from Manual Arts High School in Los Angeles in 1939. Upon graduation, she moved back to Cavalier, as her mother said, “Colleen would rather be a big fish in a small pond rather than a little fish in a big pond.” Colleen graduated in 1945 from Valley City State College, Mercy Hospital School of Nursing. She met her future husband John (Jack) C. Burchill while taking care of his mother Bessie in Valley City, ND.

Jack and Colleen were married on November 6th, 1947, and to this union, five children were born. Prior to moving to Pierre in 1953, they made their home in Valley City, ND, and Ft. Thompson, SD.

Colleen was a compassionate and caring Registered Nurse, a vocation which she was very proud of. She worked at St. Mary’s Hospital in the Recovery Room from 1969-1984.

While living in Pierre, she devoted most of her energy toward Ss. Peter and Paul Catholic Church serving on the Funeral Committee and she was a charter member of the Ss. Peter and Paul Catholic Daughters of America. She was passionate about sports, following her children and grandchildren in their sporting events. If she was not in attendance at the sporting event, she would listen to KCCR radio and keep the individual points of each player. The State Boys Basketball Tournament was another favorite, attending 47 Tournaments.

Colleen’s simple pleasures were baking chocolate chip cookies, playing bridge, attending daily mass and spending time with her family. She had a great Irish wit and was very proud of her Irish Heritage.

She was preceded in death by her parents Bernard and Matilda, her husband Jack, and her four sisters Margaret Johnson, Helen Henderson, Mickey Schroeder and Ruth Gran.

Memorials may be directed to St. Joseph’s Catholic School in Pierre. Online condolences may be written at: www.isburgfuneralchapels.com.