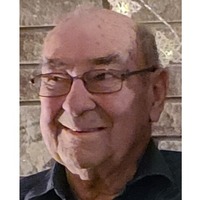 Gerald “Jerry” William Baade, age 89, passed away Friday, May 14, 2021 at Sanford Hospital in Sioux Falls, South Dakota. A Celebration of Life will be held at a later date. Condolences may be sent to the family, or to Miller Funeral Home, 507 S Main Ave, Sioux Falls, SD 57104, to be sent along to family.

Jerry was born to Helmuth August and Elsie (Carls) Baade on Saturday, March 26, 1932 in Hartford, South Dakota. He attended Hartford Area Country Schools. In 1951, Jerry enlisted in the Navy and served in the Korean War. He was honorably discharged in 1952.

In May of 1956, Jerry married the love of his life Ora Mae Beasley at Lynd Methodist Church in Lynd, Minnesota. The two moved to Sioux Falls and remained there since. He worked many labor jobs through the years. Jerry was a dispatcher for Kansas Arizona Motor Express and had semis with K & J trucking, retiring in 1998.

Jerry grew up working on family farms in Hartford and Del Rapids areas, where his love of horses began. He enjoyed camping and traveling.  Jerry had many vacations with family throughout the United States, but especially loved the West and any National Park. He loved Fords, boating, and most of all, his time with family and friends, especially all his camping friends throughout the years. He also loved his PBR. Jerry was a member of Asbury United Methodist Church, the Veterans of Foreign Wars, the American Legion, Moose Lodge, and the Elks.

Jerry is preceded in death by his parents, Elsie and Helmuth Baade; his sister Wanda (Mick) Dede also of Sioux Falls; and his brother Edwin Baade.

Memorials can be made to the American Lung Association in Gerald’s name. Jerry will be greatly and dearly missed by friends and family.